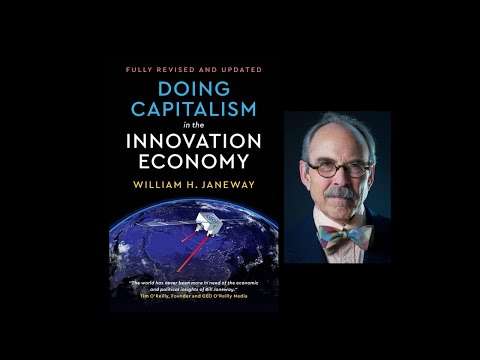 What works for innovation involves a complex mix of factors. It is a search to discover the future, recognising that’s unevenly distributed. Innovation has been given prominence by Australia’s newly minted Prime Minister, Malcolm Turnbull. His government’s promised innovation policy statement is expected within a month.  It will arrive at a time of uncertainty.

On the subject of what works for innovation I recommend a short, radio conversation yesterday between Phillip Adams and venture capitalist and Cambridge University economics academic,  William H. Janeway, author of the 2012 book “Doing Capitalism in the Innovation Economy“. The conversation inspired this post.

I like the “theorist-practitioner” job title used by Janeway so much I’m stealing it. For over three decades, working for clients across many industries, I’ve been both a student and teacher of innovation and commercialisation and related isms. (All that gets put in a can with a label of “IP, IT and business lawyer”.)

Yet since 2007 as regards public policy I’ve not been able to get off the floor after writing my Khrushchev speech titled Australia’s national innovation policy, ho hum.

Since then, in the private sphere noise on Web 2.0, disruption and start-ups has been accompanied by hero worship of tech billionaires. It has drowned out otherwise substantive newish ideas, rethinking old ideas to suit new circumstances, for example:

Discussion about public and private sector innovation has consequently become as confused globally as President George Bush when he reportedly said: “the trouble with the French is that they don’t have a word for entrepreneur”. (The origins of the word “entrepreneurship” connects with the work of the French economist, Jean-Baptise Say and his 1803 Treatise on Political Economy.)

Listening to Janeway and others I feel refreshed on the subject once more.

I’ve been noticing a cluster of eclectic political economy thinkers working with new evidence and questioning the monoculture of neoliberal corporate dogma. The dogma, they point out, can’t explain either the rise of Silicon Valley or the rise of China (taking 500 million people out of poverty in a few decades).

I recognised that eclectic thinking in Kiteflyer’s review of Janeway’s book on Amazon: “This [book] is all framed by a balanced synthesis of economic theories. The viewpoint is cross-ideological, encompassing the insights and exposing the oversights of a wide range of economists, including Adam Smith, Marx, Keynes, Schumpeter, Samuelson, Minsky, and more. There are lucid explanations of how financial theories, new financial instruments, and the rise of computer modeling contributed to the market gyrations we have seen lately. And there are frequent flashes of wit about the errors made by investors, theorists, and politicians. All in all, a book that deserves a wide audience.”

Listening to the new political economy thinkers, of late I’m hearing more voices like Janeway’s (eg Mariana Mazzucato, Martin Jacques and many in venture capital in Silicon Valley). Collectively their takeaways include these points:

Despite such challenges, as the forthcoming Australian government policy will no doubt urge, we have no choice but to give it a go, wherever we live.