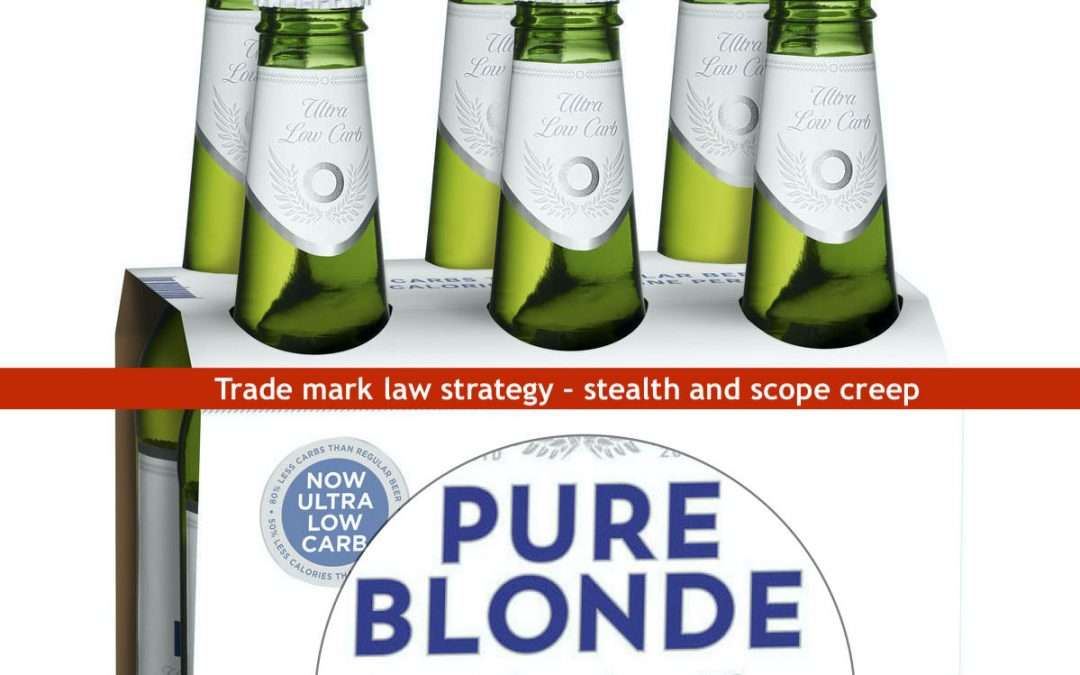 Pre-launch planning involved a sophisticated trade mark law strategy. “Blonde” is a common descriptor (eg it’s in dictionaries) for a light coloured style of beer. Blonde described the product (beer), hence the word could not be a registered trade mark. What to do? If you want to fast track read the numbered list below.


A year later the beer brand became Pure Blonde, dropping “Carlton”, except for use on the bottle neck label. What was Fosters’ trade mark law strategy or  legal battle plan for the shift from Carlton Pure Blonde to just Pure Blonde?

On its website the Fosters Group Ltd states “Pure Blonde – the first beer in Australia to be marketed as low-carbohydrate – is full-strength and great tasting, with 70% less carbohydrates than a regular beer.”

Foster writes its own history

In The Australian Financial Review on 6 August 2007, marketing specialist Neil Shoebridge, corrects Fosters’ subtle spin. He notes that Fosters’ product was not the first low-carbohydrate beer in Australia. He writes that “title belongs to three brands – Swan Dry, Tooheys Dry and Castlemaine Dry…”.

Three years on, Pure Blonde is a winner in the now busy blonde beer marketplace of 2007. As a winner, Fosters is writing history. But there’s more to its legal strategy story.

Shoebridge notes the signs of Pure Blonde’s market success since its launch:

It is hard to believe that the sole reason for not emphasising the Carlton name was because the product no longer needed a leg up using the established Carlton name. Certainly, Carlton is a big name. Fosters’ beer brand or trade mark portfolio includes Carlton Dry, Carlton Gold, Carlton Sterling, Carlton Draught, Carlton Mid, and Carlton Black.

More likely, legal considerations were involved in the launch stage for using the Carlton name in both marketing and in Fosters’ trade mark application for the beer. One legal strategy for building a legal monopoly over a trade mark worth having (ie a trade mark which is legally defendable) involves combining stealth and scope creep.

This analysis may not explain in full, or even in part, the TRUE CAUSE for the change in name or the trade mark registration strategy. However, it does shed light on the LEGAL EFFECT of the name change under trade mark or branding law in Australia. The legal effect of de-emphasising the name Carlton after the launch stage, and dropping it from the most recent trade mark registration, has been to build the legal brand power of the now very valuable name – Pure Blonde.

Marketers love to seek legal monopolies over descriptive, short and focused brand names. Despite legal obstacles against descriptive names, they can do it provided they adopt an informed legal strategy to build legal monopoly brand rights under trade practices, trade mark and other intellectual property law. Through strategy Fosters has kept its trade mark strategy simple for blondes.