“When the wind of change blows, some build walls while others build windmills.”

If you had to choose a word or phrase to describe China, what would it be? Populous? Changing fast? What about innovative? That is in fact China’s aim – to become an innovative, knowledge-based intellectual property (“IP”) powerhouse.

China has returned to its historical center, being a leader in the global economy. China is the world’s largest economy using purchasing power parity as an indicator, as the International Monetary Fund (“IMF”) does.

Recently some commentators looking backwards were concerned by China’s gross domestic product (“GDP”) data for 2014. As predicted, it grew at 7.4%. By some measures this was the slowest economic growth in China for 24 years. (This recent message is different from the following graphic of a year or so ago used by venture capitalist Mary Meeker in her annual presentation for her firm Kleiner Perkins Caufield & Byers. We see in the graphic the GDP of China equaling that Europe in about 2010 and heading towards that of the United States.) 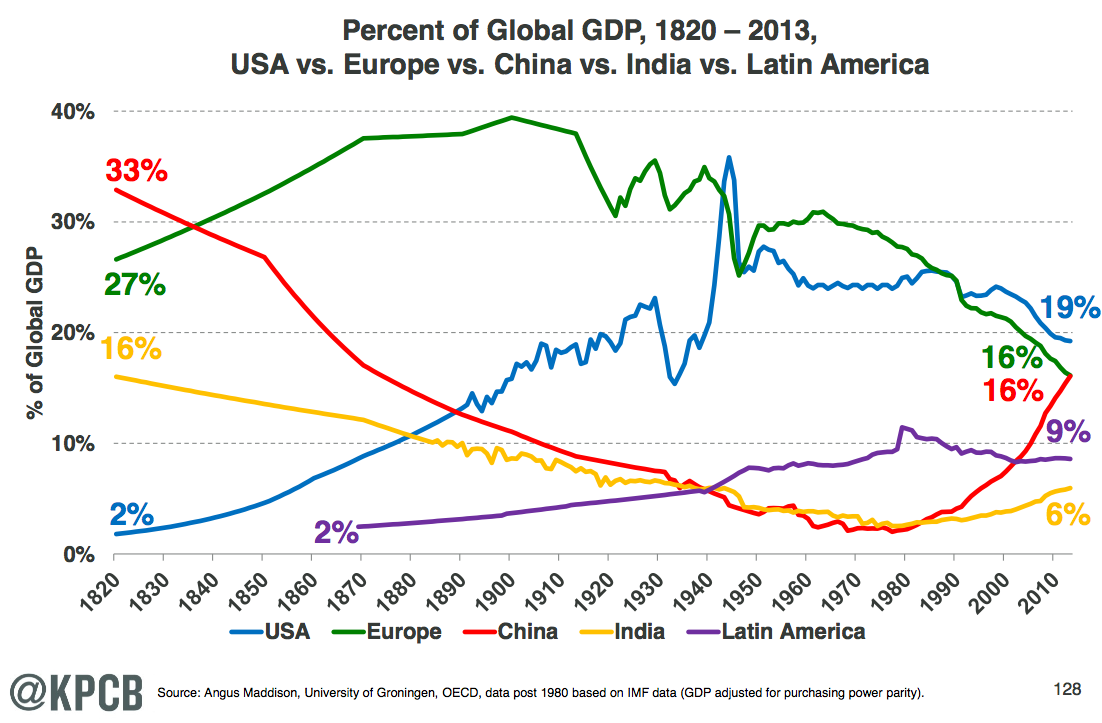 However, leaders in China and some economists view this deceleration as an inevitability, or even a much-needed change for the Middle Kingdom. Indeed, China seeks new mechanisms for comparative advantage, recognising that low-cost manufacturing is not sustainable long term.

Low-technology and labour-intensive industries used to flock to China to set up manufacturing lines. But as China’s labour costs escalate and labour relations grow tense, garment manufacturers and others have relocated to Bangladesh, Cambodia and other lower-cost developing countries.

Another challenge for China is its shrinking labour force due to an ageing population, an aftermath of the previous one-child policy. As McKinsey & Company estimates, fifty years from now there will be one person aged 65 or above for every two others in the workforce in China.

China’s government is well aware of the middle income trap. From President Xi Jinping (习近平) down, the People’s Republic is embracing its own framing of a “new normal” (“新常态”).

In his January 2015 speech at Davos, Premier Li Keqiang of the PRC emphasised that China is adopting “twin engines” (双引擎). Firstly, mass entrepreneurship and innovation and secondly increasing the supply of public goods and services in China. Li Keqiang quoted the proverb: “When the wind of change blows, some build walls while others build windmills.”

Encouragement of research and development (“R&D”) to raise productivity has been in China’s policy agenda for several years, as reflected in its 12th Five-Year Plan (十二五规划) for which 2015 is the concluding year.

Corresponding policies and laws have been introduced.

Commonplace Western perceptions freeze the image of China within the infamous Shanzhai (山寨) or copycat culture. Yet, as regards R&D,the OECD Science, Technology and Industry Outlook 2014 report predicts that by 2019 China will exceed the US in R&D expenditure.

Further, studies such as the Global Innovation 1000 report that in recent years Chinese companies have been involved in building “advanced innovation capabilities” to compete for a share of “global markets with in-demand, high-tech products”. These include companies such as Haier Group (海尔集团) and Beijing Xiaomi Technology Co. Ltd. (北京小米科技).

There are valid doubts about the quality of many patent applications, driven perhaps by imposed quotas, directives, tax benefits or other incentives. There is also limited international impact so far from Chinese innovation. Nevertheless the change in attitude and emphasis within Chinese industry cannot be doubted. They are determined to be much more than the world’s production line.

Protection and enforcement concerns remain too about China’s IP system. In its 2014 report the Office of the United States Trade Relations again included China in its “Priority Watch List” for insufficient IP protection or enforcement. Meanwhile, and despite doubts, in late 2014 China established Intellectual Property Courts (知识产权法院) in Beijing, Shanghai and Guangzhou respectively.

China is looking abroad for growth. It is extending a warmer welcome to foreign direct investments into Mainland China, whether they be monetary or technological investments. In 2013 it instituted its Pilot Free Trade Zone in Shanghai and has subsequently introduced more relaxed regulations for foreign investors and business organisations. This model of operation will be replicated in more parts of China as it introduces more free trade zones.

A warm welcome is also being extended to the almost 700,000 Chinese students studying abroad. China is eager to call on its diaspora and welcome home its Haigui (海归), a Mandarin pun for sea turtles used to describe Chinese students who return to China after studying abroad. After all, who better appreciates the significance of “know your enemy”(知己知彼) than Sun Tzu’s (孙子) own people? Evidence indicates that multinational corporations in China in particular favour hiring Haiguis to fill management positions.

China is changing from being the world’s low cost factory to become a global IP power. National economies worldwide, including the US and arguably India, compete for mechanisms to improve productivity and entrepreneurship and to shift economic resources out of areas of lower productivity to areas with greater yield. For this, supporting the life cycle of intellectual property is a national economic imperative as orthodox as having a central bank, fair tax system and environmental regulation.

Rosana She was born in Hong Kong, went to high school in England, graduated from Sydney University and was a lawyer with Dilanchian Lawyers & Consultants from 20014 to 2017.