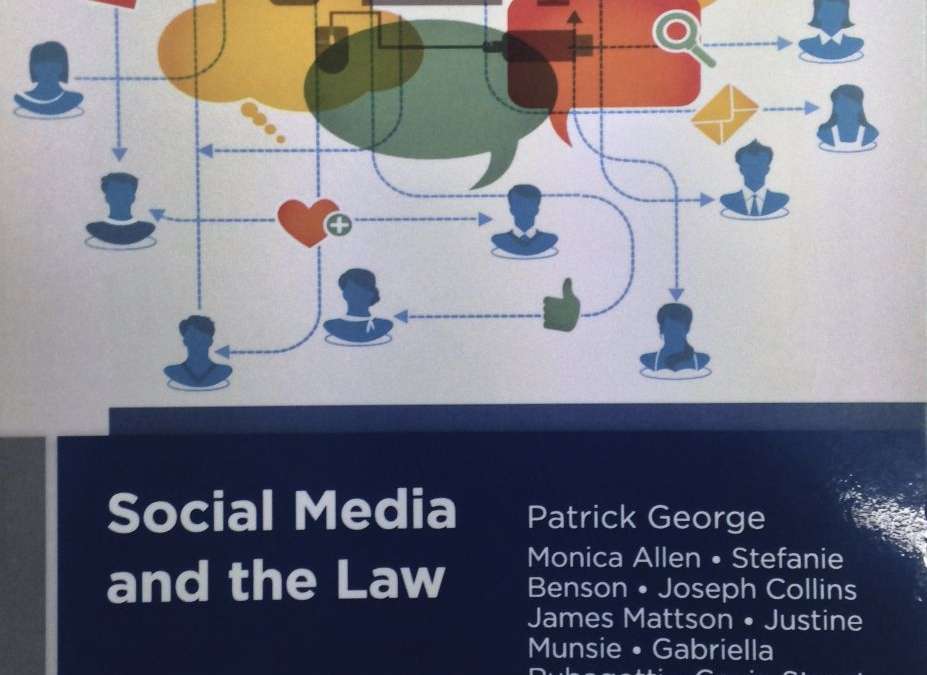 Social media is an inevitable and integral part of the lives of most individuals around the world seeking to communicate and share information. In terms of businesses and other organisations, social media is  largely a marketing channel for reaching citizens, members, users and customers.

As of 25 November 2014, according to Internet Live Stats, in every second:

A proliferation of social media platforms now exist on an internet with a global population of three billion. Use of them is examined by these authors of this new Australian law book: 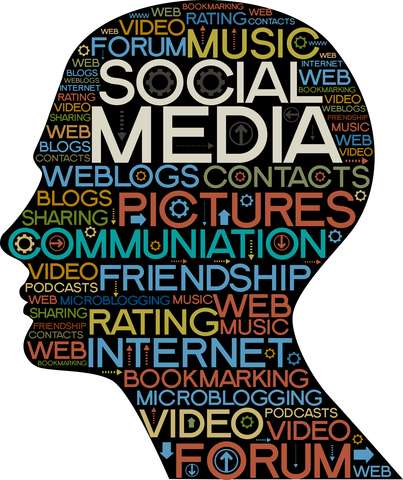 Social media touches many areas of law including employment, privacy, defamation, and copyright

The seven chapters of the book are:

As social media is a business tool, companies and organisations hire social media managers and community managers to oversee social media network accounts and develop social media content, campaigns and strategies. As discussed in James Mattson’s chapter “Social Media and Employment Law”, the pervasiveness of social media in a workplace has ramifications in employment relations. 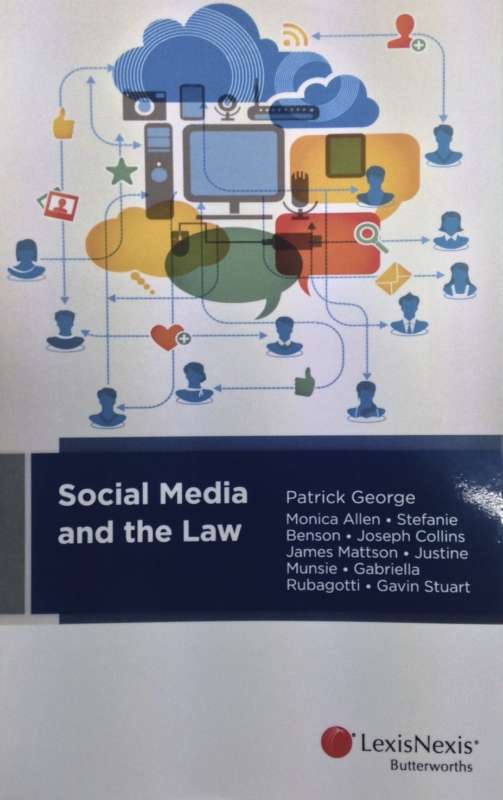 By referencing Australian, English and American cases, in his chapter, Mattson provides examples of how disputes and legal non-compliance can arise involving social media use in the employment law context:

Mattson suggests use of a practical tool, a social media policy for its employees (pg 68) and gives guidance for its development.

Adding to all this, there can be a social media policy:

In the chapter on employment law, the author discusses how workplace surveillance without prior consent from an employee amounts to breach of privacy law. In the chapter “Social Media and Privacy”, Gabriella Rubagotti examines how privacy law interacts with social media in general.

The Privacy Act 1988 (Cth) was recently amended and together with the introduction of the Privacy Regulation 2013 (Cth), Australian entities now bear a more onerous obligation as regards the handling of personal information.  In the chapter, Rubagotti explores concepts of privacy and confidential information, examines how privacy is protected in both Australia and abroad and identifies situations that amount to breach of confidence. For example, by referring to the case of Norman South Pty Ltd & Geoffrey Edelsten v Stacey da Silva [2012] VSC 477, she highlights that a social media user may fail to import an obligation of confidence to a recipient of information if that information is communicated via a social media platform. She also helpfully outlines the major amendments made to the Privacy Act and explains the significance of each of the 13 Australian Privacy Principles (“APPs”), which were introduced to replace the previous National Privacy Principles. 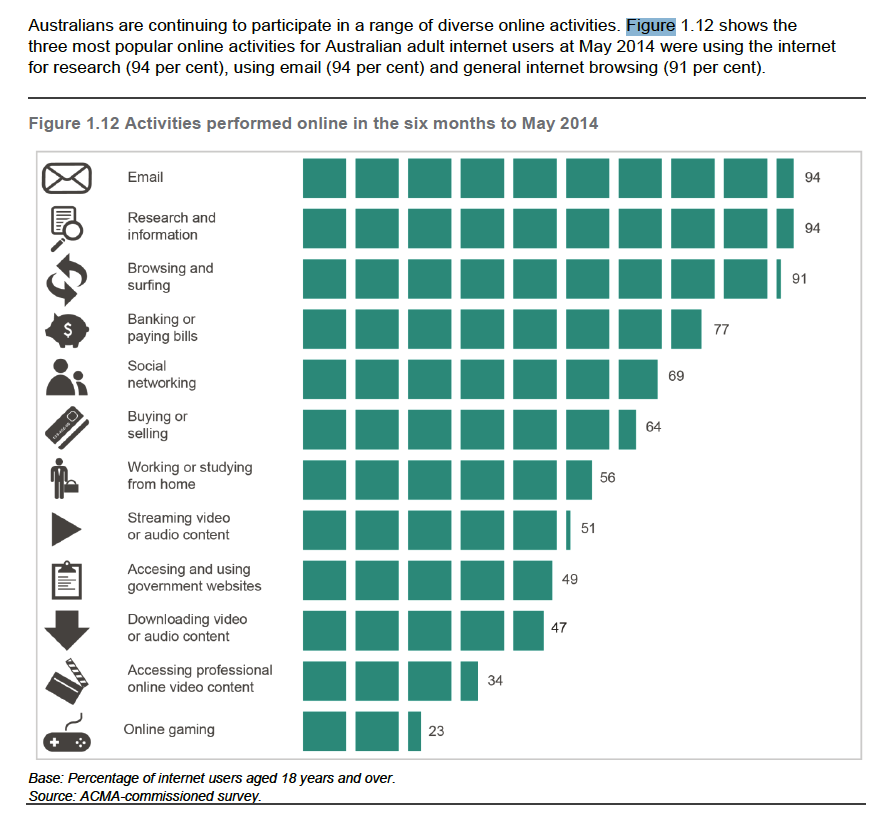 Online activity in 2014 by percentage of users over 18

Moreover, the author notes that “individuals routinely agree to the terms of privacy policies prior to joining social media networks” even though those policies frequently permit an “extensive and unchecked use of private information” by social media platform hosts (pg 75). Another of the book’s authors expresses a similar view: “… many users operate in an atmosphere of complete (an on occasion misplaced) trust with their social media providers” (pg.15).

As awareness in protection of private data increases, perhaps future social media users would more likely be sceptical towards privacy policies and pay closer attention to the terms of such policies. However, some academics have begun to question whether privacy can still be effectively protected due to collection of data via internet communications such as communication over social media. 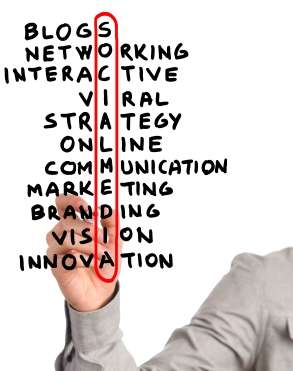 Terms of use are changing the way contracts are entered into. On registration to become a registered user on a social media platform, apart from filling in personal details, a user has to agree to a particular social media host’s terms of use. Though they may be named differently (eg Facebook’s terms of use is titled “Statement of Rights and Responsibilities”, Twitter’s is titled “Terms of Service” and Instagram’s is “Terms of Use”), each essentially seeks to create a contractually binding relationship between the platform and each user. For example, a user who has agreed to Facebook’s Statement of Rights is not permitted to use his or her personal timeline for commercial gain. Therefore, as Stephanie Benson points out in her chapter “Social Media and the ACCC”, selling a Facebook status to an advertiser is a breach of Facebook’s terms and is thus prohibited.

But is an average user really aware of the significance of such terms of use? A computer game retailer illustrated this in a prior April Fool’s Day prank. 7,500 online shoppers obliviously sold their “immortal soul” to the retailer when placing orders on the retailer’s website by blindly agreeing to its terms. The terms included the following clause: “By placing an order via this Web site on the first day of the fourth month of the year 2010 Anno Domini, you agree to grant Us a non transferable option to claim, for now and for ever more, your immortal soul.”

Though a playful joke, the prank demonstrates that online users commonly ignore the contents of terms of use and move straight onto registration or use of a website. As indicated above, individuals, including social media users, should not ignore such terms because they have significant ramifications on how a social media host can manage contents of and allocate obligations on its users. 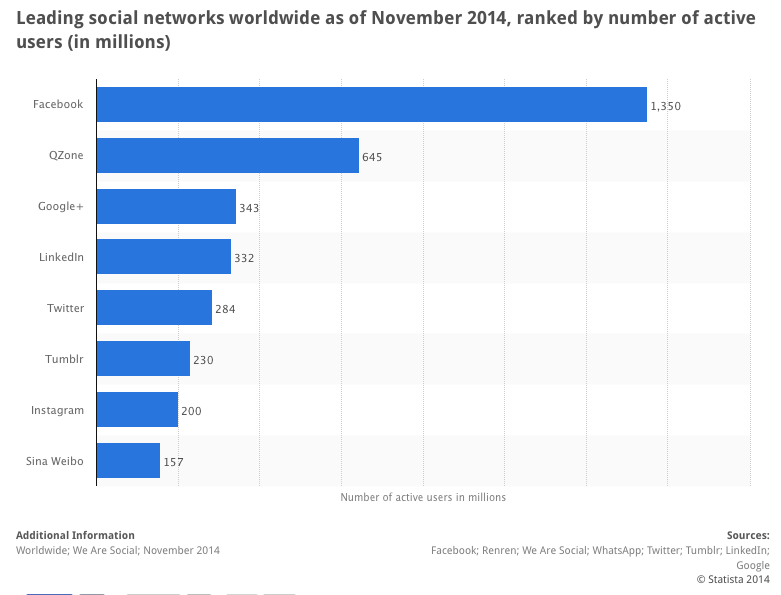 Munsie also discusses the ramifications of liking, sharing and re-tweeting social media content. Social media platforms usually offer functions such as “like”, “share” or “retweet” next to each post uploaded by a user. These functions, as Munsie indicates, probably generate implied licences of use for another user to redistribute the content. However, by referring to the American case of Agence France Presse v Morel 2011 WL 147718 (S.D.N.Y. Jan. 14, 2011), the author illustrates that such implied licence may not extend to use “outside the original site or to commercial exploitation of the content” (pg. 260). For example, a book author may breach copyright laws if his or her book includes posts uploaded onto Facebook by a third party Facebook user, and that author has not obtained prior consent from the user (ie copyright owner).

Another additional measure to take is to specify in such social media content that it is copyrighted material and reposting or sharing is not permitted.

When might use of social media contravene the law?

Apart from copying and republishing copyrighted materials without consent from a copyright owner, a social media platform user should be careful not to commit copyright infringement by means of authorising infringement.

This occurs when a user posts a link to a third party website that contains material that infringes copyright or that the user knows would contain infringing material. Munsie explains that such user may be liable for copyright infringement under section 101(1A) of the Copyright Act 1968 (Cth) if that user’s follower or “friend” accesses such website via that user’s link.

In his chapter “Social Media and Defamation Law”, Patrick George highlights another possible risk of legal liability stemming from sharing or retweeting social media posts under the repetition rule in defamation law. The author uses the English case of Lord McAlpine v Bercow [2013] EWHC 1342 as a reminder that if a person republishes (in social media terms, by retweeting or sharing a post) a defamatory allegation made by another, that republisher is equally liable as the original defamer. Such allegations may include statements that expose another person to “hatred, contempt or ridicule among ordinary reasonable persons” (pg 158).

In her chapter “Social Media and the ACCC”, Benson highlights that a user may be liable for committing misleading conduct under the Australian Consumer Law on a social media platform.

If a social media platform provider allows misleading and deceptive comments related to goods or services to be posted on its website, such posts will be treated as advertisement. That platform provider will likely be held liable for committing misleading and deceptive conduct, as demonstrated in the case of Australian Competition and Consumer Commission v Allergy Pathway (No 2) (2011) 192 FCR 34.

As noted by Benson in her analysis of the case Seafolly Pty Ltd v Madden (2012) 297 ALR 337 if a social media user makes a reckless comment on a social media platform, that user may be committing misleading and deceptive conduct if such comment is considered not mere commentary on industry matters.

The scope of legal regulation of social media will evolve. This book overviews current Australian law and provides insights from other common law jurisdictions. However, as Collins noted in the Overview chapter, the rapid change in social media trends may mean that the book will require regular updating.

Rosana She was born in Hong Kong, went to high school in England, and graduated from Sydney University with degrees in law and arts (media and communications). She is a lawyer with Dilanchian Lawyers & Consultants specialising in trade with China, intellectual property, information technology and general business law.