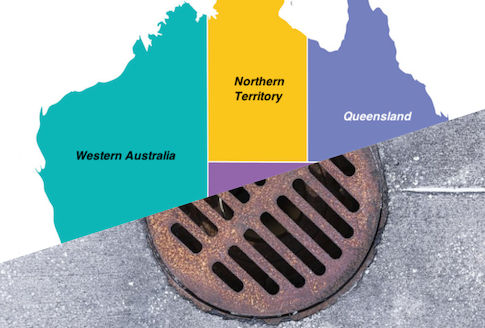 Last week Google launched Google Maps Australia. This puts the Yellow Pages asset and the revenue stream of Telstra’s Sensis right into Google’s firing line. This is especially so because with Google Maps you can not only locate product and service retailers and their contact details, but also get driving directions to them and mobile access to that data.

For now Yellow Pages  has a greater depth of data. Business data for Google Maps is supplied by News Ltd’s truelocal.com.au. What’s going on?

Expansion of the drain

Traditional Australian media and advertising businesses are threatened by a vortex pulling in innovation and activity on the web and private equity capital. The vortex is fueled partly by redirected advertising revenues, moving to new sectors or moving from offline media to online media. Publishers and advertisers who pay big bucks to be in traditional Australian media should take special note of the trend.

Yellow Pages, Australian publishers of magazines and newspapers and other Australian enterprises dependent on advertising can’t stand back and just watch in 2007 when global players like Google and Yahoo! take thicker and more regular slices off the advertising base on which traditional Australian media relies.

The trend is evident in many deals over the last five months in the Australian media sector. You have to look beyond advertising and take a helicopter view of developments to recognize the emerging bigger picture. It’s not just about advertising revenues, it’s also about who owns the future assets that produce the revenue streams.

In late 2006 some operators (including proprietors, marketers and financiers) took positions on trends in web developments, the Howard Government’s telegraphed new media law legislation and future business trends. New directions became evident in a frenzy of print and electronic media and Internet-related deals.

A series of those positions have connections back to John Fairfax Holdings Ltd. Fred Hilmer (pictured) was CEO of Fairfax from 1998 to 2005, he is currently Vice Chancellor of the University of New South Wales. Commentators have said that Hilmer’s late moves in taking Fairfax into online spaces is relevant to a number of recent big plays. Briefly and with simplification:

I recently prepared a guide titled Internet Advertising Guide which we are now providing to our clients and those who enquire about online advertising. In our firm the deal flow we are seeing is more and more client interest in advice on the impact of redirected advertising on their bottom line. Our advice covers making better use of websites, properly integrating online presence with online marketing, and securing new revenue streams from online advertising. Our legal advice necessarily responds to the mix of legal, business and technology developments.

ALI MOORE: There was a string of profit results today, including the Fairfax Group, which says poor trading conditions in key markets, together with rising costs dampened first half earnings. The media group’s headline profit rose 19 per cent to $142 million, helped by the sale of its shares in carsales.com.au. But excluding the $13 million one-off gain, profit fell just under 3 per cent to $121 million. Amplified advertising volume and demand in its two biggest markets, Sydney and Melbourne, remains weak. Management is now focused on getting the $9 billion merger with Rural Press across the line and is confident of completing the deal within three months. I spoke with Fairfax CEO David Kirk in his Sydney office earlier this evening. David Kirk, welcome to Lateline Business. After one-offs, a slightly lower result, how have the first six weeks of the current half looked?

DAVID KIRK, CEO, FAIRFAX MEDIA: It’s really difficult to say, actually. It’s quite changeable. We had three very quiet weeks at the beginning of the year. The last two have been a bit firmer. We’re just waiting to see how the year unfolds really, at the moment.

ALI MOORE: When you look at the six months just gone, Fairfax Digital and the whole online business, that’s the real driver isn’t it?

DAVID KIRK: Fairfax Digital is going fantastically well. We grew the top and bottom line in the mid-40s, and that’s a great percentage growth, and Trade Me in New Zealand, which is our big digital online business in New Zealand, also grew very strongly and brought in over $23 million in New Zealand dollars, so we’re very pleased about our digital business.

ALI MOORE: Total traffic across Fairfax websites up 47 per cent. How long until you start charge to access to your publications on the Net?

DAVID KIRK: We don’t think a subscription model for general news is the strongest model. If you want to aggregate a big audience and it is quite competitive getting those audiences online, a lot of people product online news and information, you need to get a big audience to charge advertisers. Of course we’ve got a great audience and they stay a long time when they come. That means we can charge the highest yields for our ads. It’s a very highly-qualified audience, an AB audience, so we’re very pleased with those presenters and we won’t be charging them for subscriptions.

ALI MOORE: Right now digital is where the growth is but is not where the revenue is. In the last half it contributed 9 per cent of revenue, compared to well over 60 per cent from the publication. Given the growth rates, how long until digital, the whole online business makes a serious dent in the proportion of revenue that comes from publications versus online?

DAVID KIRK: Well, if we look at the earnings base, we’ll see that six-month period, online contributed nearly 14 per cent of our EBITDA and that’s pretty material, and I would challenge people to look around, certainly in Australasia and parts of the world, and companies of our size and our annual EBITDA is well over $500 million, and look at a company that’s got 14 per cent growing towards 20 per cent of its earnings coming from the Internet. So I think we’re extraordinarily well-positioned, and I think that Internet share will just continue to grow.