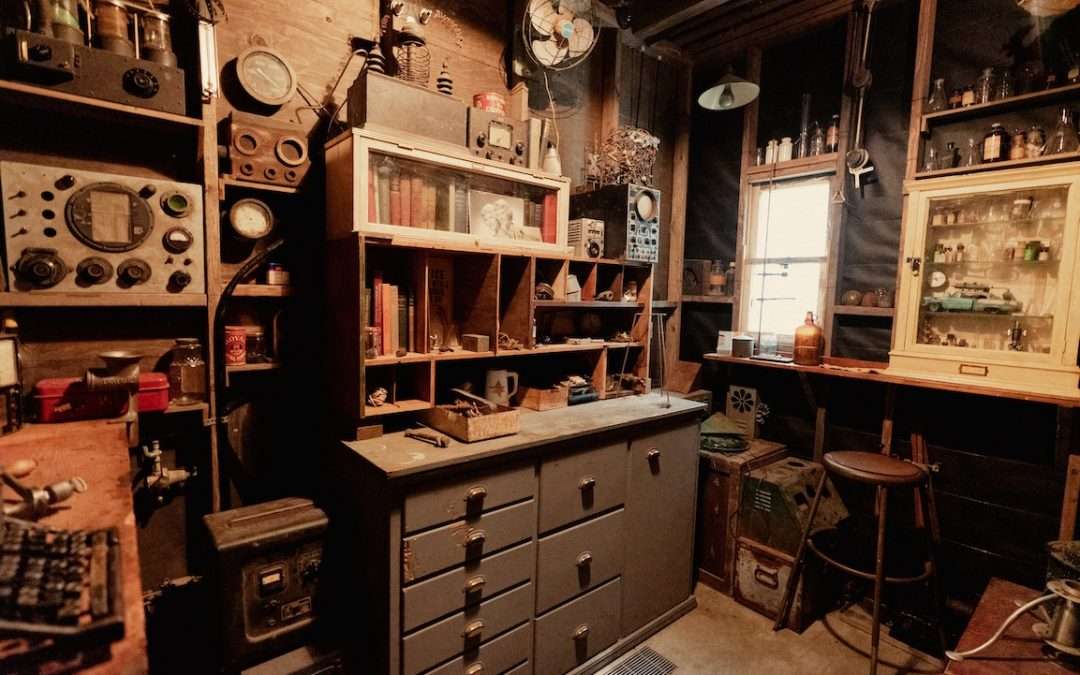 My earliest memory of seeing the word “entrepreneur” is in about 1968. I was 11 years old and in the Sydney suburb of Willoughby. 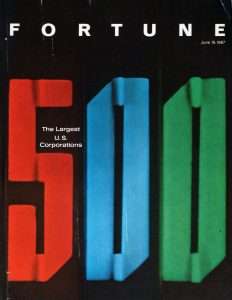 Issue of Fortune magazine from 1967. Ever wondered where the expression “Fortune 500” comes from? Here it is.

I was going through items in my parent’s garage when I noticed a box of Fortune magazines stored there by Hratch, my eldest brother. He was a food retailing serial entrepreneur from about 1968 to the early 1990s, starting with his Omar Khayyam’s Delicatessen in Chatswood.

Today’s post is on entrepreneurship and how to use garage culture to aim to make a fortune.

Garages have flexible uses. They are used for parties, noisy jam sessions by young garage bands and quiet contemplation by do-it-yourself enthusiasts surrounded by their favourite tools and toys.

Importantly a garage can be a rent-free place to work while keeping your day job. It’s also often free of hustle and bustle, a place that’s peaceful, where you can think deeply and reflect on your hobbies and old toys.

Garages are symbols of modernity. No car, no garage. They are also workspaces for home improvement. Home Depot in the US and Mitre 10 and Bunnings Warehouse in Australia (which acquired BBC Hardware in 2001) capitalise on this.

These retailers have monetised the Australian love of garages, they grow by supporting the habits and values of garage users and providing them with retail therapy. Critically, in Australia they benefit from a tax system which is very heavily biased in favour of homeowners, including their fixation on remodelling their two most expensive rooms, the toilet and the kitchen. The sale of a private residence is not subject to capital gains tax in Australia.

Garages and sheds are cultural icons in Australia and New Zealand. They have a supportive culture milieu, which includes using barbecues and backyards. This is evidenced on television and in books. Men and Their Sheds is a 1996 documentary distributed by ABC Television, as is the 2004 series titled Inventions from the Shed. Australian humour is apparent in the naming of the website – Institute of Backyard Studies – by Mark Thomson, the author of “The Complete Blokes and Sheds” (published in 2002 by HarperCollins Publishers (Australia) Pty Ltd) and prior books in that series as well as books on BBQs. 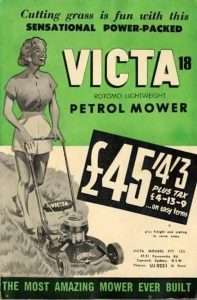 Among the famous Australian garage inventions is the Victa Lawnmower. Mervyn Victor Richardson was an engineering supplies salesman in his 50s when he conceived and assembled a petrol-engine mower in his garage in the Sydney suburb of Concord. His invention prototype was made from a few pieces of metal and a peach tin for a fuel can. His solution was cheaper, lighter and easier to use than what had come before.

In time word-of-mouth customers lined up outside his garage. Richardson set up a family company in 1953 and by 1955 the mowers were made by a full-time staff of 100 people.

The prototype was not patented. The first patent was lodged on 2 May 1955. Within a few years Richardson was a millionaire. Various Victa improvements were patented and the name Victa is protected by numerous trade mark registrations in the name of Victa Ltd. Throughout the company has used bold, effective advertising, such as the 1950s illustration in this post of a woman mowing. Early on it also adopted a strong tag line: “Turning grass into lawn“ 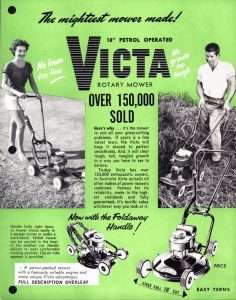 Garage architecture has itself been the beneficiary of Australian invention. Since 1956 B&D Roller Door has manufactured over 5 million garage doors, for installations in Australia and in over 20 countries. Its About page sets out the background to the launch in 1956 of the B&D Roll-A-Door, the first all-steel, mass-produced roll-a-door with pressed metal sheets fastened together forming a continuous, flexible curtain that rolled around an axle with spring assembly. B&D Australia Pty Ltd is the owner of numerous trade marks and patents.

Barbeques Galore is another Australian company benefiting from garage culture. It too is active in registering, monitoring or dealing with trade marks, patents and designs.

It operates more than 165 retail and licensed stores across Australia and the US and generates A$300 million in sales annually, with 50% coming from the US market.  It delisted from the NASDAQ Exchange following its acquisition in October 2005 by Australian private equity manager Ironbridge Capital which provided total funding of A$110 million for the transaction.

Garages strongly feature in the urban architecture of the United States as much as Australia. Silicon Valley provides at least four examples noting the status of the garage in its culture.

There is also the myth of garage inventors which has grown along with the above reality. The myth is sustained by television programs (like the ABC’s The New Inventors) which promote the idea of a heroic individual garage inventor.

This is out of date and misleading. Since about the mid-20th century and earlier in some places, invention and innovation has been more typically the result of work in companies and corporate labs. It has usually involved alliances and collaborative teams, certainly for commercialisation, marketing and distribution.

Applying garage culture is your business

For your organisation you could look for ideas in BusinessWeek‘s 2006 list of The World’s Most Innovative Companies, Clayton M. Christensen’s insightful 2001 article titled Assessing Your Organization’s Innovation Capabilities, and McKinsey & Company’s 2006 survey report on “Managing your organization by the evidence ” (registration required). Also consider running an employee survey, for that we can refer you to experienced HR and management consultants. The McKinsey report is persuasive and is summarised in this nutshell:

“Academic literature, our own experience, and intuition all point to accountability, clear direction setting, and a strong culture as the main foundations of a high-performing company. These outcomes underpin high levels of organizational performance.

The McKinsey research unambiguously identifies the best practices for achieving these outcomes. Senior executives must provide for clear roles within a structure matched to the needs of the business (accountability), articulate a compelling vision of the future (direction), and develop an environment that encourages openness, trust, and challenge (culture). Each of these practices, the data tell us, works best in relation to a specific outcome, but applied in combination they produce much more dramatic results, for they have a mutually reinforcing dynamic. Increasing the amount of effort behind any one practice increases the likelihood of achieving not only its target outcome but also the other target outcomes, thus making organizations more effective overall.

For most people, the way these three practices – clear roles, an inspiring vision, and an open and trusting culture – interact to create complementarities is intuitively clear. Employees perform well when they are working toward a future that attracts them, know when they can operate freely, and are encouraged to improve constantly.“

For a home-grown solution suiting your personal taste and habits, reflect on why you enjoy using your own garage or shed. Tell your work colleagues and bring fun and passion back to work. Contact us if you need legal assistance or a referral to qualified consultants.

Photo credit: The inside garage photo is from an exhibit at Los Angeles County Museum of Art. The photo is by Elmer Cañas on Unsplash – https://unsplash.com/@elmercanasjr